Scanning Electron Microscopy (SEM) is an imaging technique that provides higher magnification than is possible using reflected light, which is the optical microscopy method most familiar to everyone. By beaming a stream of tightly focused electrons at a surface, and precisely detecting signals emanating from that surface, a precise topological model of the surface can be developed. A computer renders the surface details in such a way as to make them appear as a black and white photograph of the surface, but at magnifications which can be up to hundreds of thousands of times their actual size.

A sample of the +48 mesh Miller graphite flotation concentrate, was further upgraded by caustic roast and acid leaching, by SGS Laboratories of Lakefield, Ontario (please refer to press release dated July 23, 2013). This material was later shown to not only exceed nuclear purity standards (please refer to press release dated October 15, 2013), but after rapid thermal upgrading, achieved a purity of 99.9978% (please refer to press release dated December 12, 2013). A sub-sample of the same material was submitted for SEM imaging, producing the high-resolution images below. Two images are of the same large (greater than 1mm) graphite crystal, at two different magnifications. The other five images are an edge-on view of one graphite crystal, under progressively increasing magnification. Red boxes have been superimposed on the images, to indicate to the reader the field of view of the next higher magnification image in the series. Click on each image for an enlarged view. 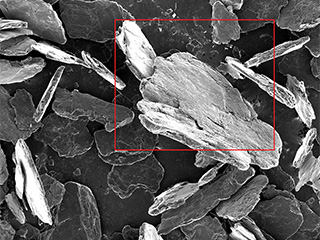 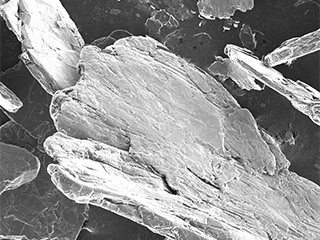 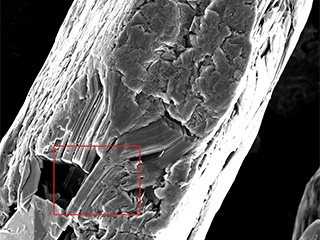 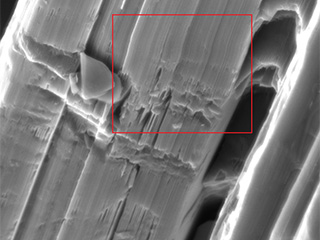 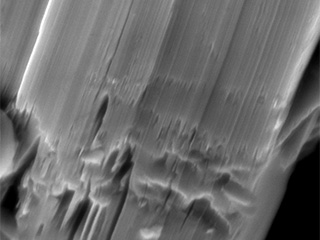 (150,000 X magnification) Even higher magnification view of the same crystal, revealing what is thought to be a fractured surface adjacent to nearly perfectly crystalline graphite crystallite domain.
Scanning Electron Microscope (SEM) images of its Miller hydrothermal graphite crystals, displaying the highly crystalline nature of the Miller graphite, evidenced by both the platy shapes of the crystals, and their highly organized layered structure.