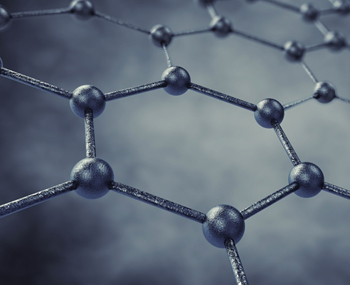 Graphene is in essence a single layer of hexagonal graphite molecules in a graphite crystalline structure. Graphene is not a recent discovery. It was first observed in 1962 by German chemists. But its unique properties remained undiscovered for decades. This changed in 1992 when researchers from the University of Manchester used Sellotape to peel off a single layer of graphite from a pencil. What they subsequently discovered (for which they were given the Nobel Prize in 2011) is that graphene is like no other material ever discovered. It is in fact not even one material, but instead a range of materials. A good comparison is plastic and all its uses today.

In its basic form it is a two-dimensional material only one atom thick that is, gram for gram, stronger than any other material known to man. Some 200 times stronger than structural steel. Also one of the most conductive materials ever discovered, and can be used for anything from composite materials like carbon-fibre to electronics. In terms of speed in things like transistors, researchers also note that they have not encountered any intrinsic limits on how fast it can go. As such there is much talk of it replacing silicon in computer chips.

Nearly all electronic products currently on the market have displays (such as TVs, computer monitors, mobile phones and cameras) containing indium tin oxide (ITO). ITO is transparent and highly conductive, making it ideal for these applications, but indium is becoming increasingly rare and therefore more expensive. In contrast, graphene is derived from carbon, which is (practically) limitless in abundance, cheap and easily recyclable. Another limitation of ITO is that it is not very flexible. This is seen as a limitation in new displays envisioned by scientists and engineers. Graphene could not only replace ITO but change the face of electronics. Think 'roll up' TVs and computers, and flexible wireless devices that could morph from being a phone, to a wristwatch, or a laptop. Truly a remarkable natural graphite product.

Numerous companies have or are developing graphite applications in building materials such as insulation, fire resistant wallboard, and graphite composites used as heat storage units in residential and commercial buildings.