All information pertaining to mineral resources herewith presented are historical in nature and while relevant, the information was obtained before the implementation of National Instrument 43-101 reporting standards. No historical estimate should be relied upon until it can be confirmed by the Company. 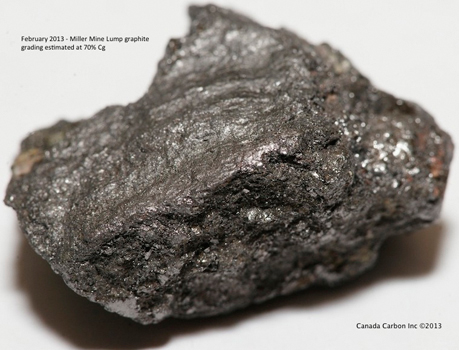 The Miller hydrothermal lump-vein historical graphite mine and surrounding property cover approximately 100 square kilometres (km)2 and is located 80 km west of Montreal in the Grenville Township. The Miller mine is a past graphite and mica producer which was worked around 1845. The Miller was likely the first graphite operation in Canada. The Morgan Crucible Company of London and also J.H. Gauthier and Company, Jersey City, used some of this graphite in their crucibles and pronounced it equal to the best graphite known to come from Ceylon (now Sri Lanka).

Main roads connect up to 800 metres away from the deposit and travel all around the property. A power line also crosses the property 500 m south of the deposit, and a bush road goes directly to the deposit, which allows for very easy access. Many old forestry roads are also present over the property which allows the creation of new access routes with very low impact on the environment. 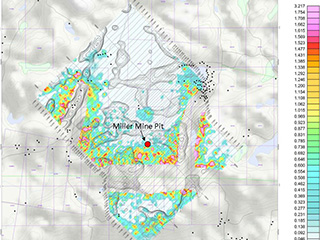 East Block and Miller Mine 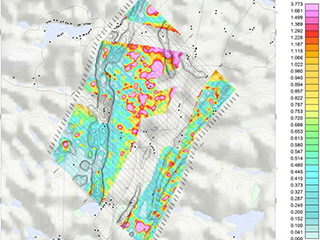 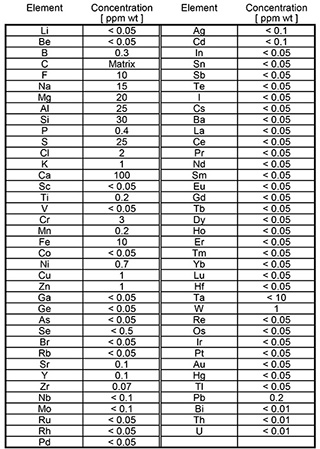 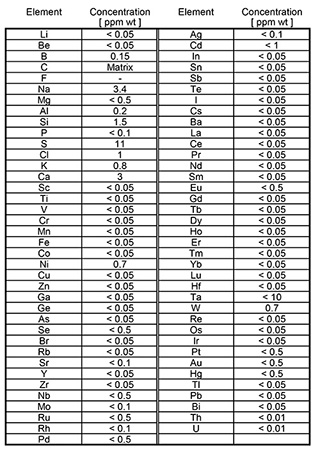 Results from extensive surface sampling identified lump graphite with head grades as high as 80.1% Cg that proved easily upgradable through a simple floatation and leach process to 99.1% Cg and 100% C with further upgrading using an Alkaline Roast and Acid Leach, the Miller graphite returned and extraordinary 100% Cg and 100% C.

MaxMin electromagnetic (“EM”), VLF, IP, geological surveys were conducted by Geosig Inc. to pinpoint additional exploration targets, which resulted in the discovery of 17 new anomalies. Trenching over the anomalies exposed graphite veins which were sampled and sent to Activation Laboratories (Actlabs) in Ancaster as well as SGS Canada Inc. (Lakefield) Ontario for graphitic carbon analysis.

Multiple surface sampling programs at Miller throughout 2013 resulted in graphite head grades of up to 80.1% Graphitic Carbon (Cg). A hydrometallurgical purification process resulted in refining this sample to 100% Cg. Repeated grind and flotation prior to the purification process included a +48 mesh concentrate of 99.1% Cg (100% Ct). The outstanding pre-purification results achieved, demonstrate the Miller graphite can be processed far more economically, efficiently and environmentally responsibly to yield a valuable product without the need for a massive tailings pond and further purification.

If higher purity is required, the upgrading, whether by a caustic bake or acid leach method, would be considerably cheaper than with a lower grade concentrate.

Trenching on the Miller property resulted in the discovery of multiple new graphite veins, some exceeding 1.7 metres in width and 12.8 metres (41.98 feet) in length. A VTEM airborne survey was completed on the Miller property consisting of over 335 line-kms of geophysical data. Combined with the data from the EM surveys, the VTEM airborne survey identified 86 clusters of EM anomalies. 5 main conductive anomalies were selected by Geotech and the CCB technical team.

A diamond drill program consisting of 595.5 meters of core in 12 holes demonstrated that the Miller graphite and wollastonite mineralization exposed at surface extends to a depth of 39 metres. A second drilling program is now underway consisting of at least 1000 meters of NQ-sized diamond drill holes. The drilling is designed to further extend graphite mineralization at depth and along strike, and to drill test three VTEM anomalies that were recently identified. The first phase of exploration work led to the discovery of a surface graphite vein that is 2m by 5m long. Studies of drill cores are underway and a second modeling of the VTEM data is also being done which incorporates new information provided by drilling.

These exceptional purity results were obtained with a non-optimized flotation and purification process further support earlier indications that the graphite from the Miller deposit may be suitable for applications requiring ultra-pure grades, such as some core components of nuclear reactors. One such nuclear application criterion was evaluated, as follows.

“The extremely high Miller graphite purity of 100% Cg as the result of preliminary metallurgical upgrading conducted by SGS Lakefield, was unprecedented. Even though the sample submitted to GDMS was of lower purity than that previously obtained, we have shown that the graphite could be suitable for use in nuclear reactors, with a calculated EBC of 0.94 ppm, as compared to the required maximum levels, typically between 1 and 3ppm. Graphite suitable for nuclear applications generally sells at a significant premium to all other graphite products, and very few upgraded graphite products can pass the EBC requirement for nuclear use. These results show the high value and quality of the Miller graphite." 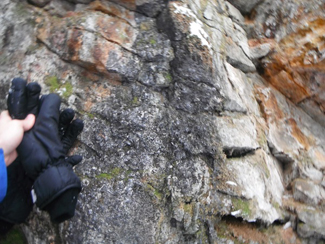 The mineralization at Miller-Graphite Mine consists of unknown quantity of graphite in five (5) graphite veins 10 to 60 cm wide. Their directions are unknown. (MRNW, ESIGEOM, 2012) Such graphite veins are usually consist of high grade mineralization, between 30 to 90% graphite. The size of the flake can vary between 0,5mm to many centimeters and would correspond to coarse flake size. (Simandl, 1989) Contact metamorphisms minerals are also present (Apatite, garnet, diopside, sphene, vesuvianite, wollastonite, a lithium mineral, and zircon). The graphite veins are hosted in a marble unit and a pegmatite, close to the contact of the two units. The mineralization consists of massive to disseminated flake of unknown size and quality. (MRNW, ESIGEOM, 2012)

The Miller-Graphite Mine is classified as a skarn deposit. The contact between a pegmatite intrusion anda marble unit has been mineralized by fluids coming out of the intrusive body. The claims are inside the same major geologic unit where marbles and pegmatite are present.

Another past worked zone is east of the deposit and its location is unknown (Maurice, 1984) but would probably be inside the property. A prospecting phase in 1989 also found a mineralized zone 100 meters east of the deposit, on the property, (Blair, 1988) but it is unknown if this is the same zone as noted in Maurice (1984). The same prospecting phase also found ancient pits in the area but they were unexplored by the team. (GM47971) The presence of multiple graphite zone suggests a very interesting context for more graphite discoveries.

An inferred electromagnetic zone was discovered in 1988 and is on the property, south-west of the Miller-Graphite deposit. (Blair, 1987) Another electromagnetic anomaly is also present 70 meters east of the deposit and the anomalous spot was also stuck by lighting while a survey was being done which indicate a conductor body around the area. (Blair, 1988)

The Miller graphite property was previously known as the "Grenville" graphite deposit. The following newspaper article from the Pittsburgh Press dated April 5, 1903 illustrates that the lump/vein graphite from the Grenville deposit was considered equal to that of Sri Lanka.

"Graphite from the Grenville deposit was forwarded to the Paris Exposition and to the Glasgow Exposition with the Canadian exhibits. It was promptly awarded the FIRST PRIZE."

"The medal awarded by the Paris Exposition is now on exhibition at the Company's office in New York, together with the certificate of award from the Glasgow Exposition. The Imperial Institute in London requested, through the Canadian Department of Colonization and Mines, at Quebec, that these exhibits of Grenville graphite be deposited permanently with it. This request was granted, and the graphite from the mines of the Grenville Graphite Company, now present in the Imperial Institute at London, has caused many inquiries from Europe to be forwarded to this Company. The quality of the product of the Grenville Mine is unquestioned. It fully equals the Ceylon graphite."

The occurrence of graphite in the province of Quebec was noted by Sir W.E. Logan in the Geological Survey Report for 1845-1846 in the township of Grenville. Mining, likely the first of the kind in Canada, was commenced on the Grenville deposits about that time by the Hon. Mr. Harwood of Vaudreuil, on a mineral-bearing vein which cut the crystalline limestone of the Grenville series.

Several Graphite occurrences are known in the Grenville district, among the principal of which may be mentioned the following:

Lot 10, range V, the first recorded, afterward known as the Miller mine, worked at intervals by various companies for about 60 years; and more recently by the Keystone Graphite Co. of Wilkesbarre, Pa.; lot 9, range V, adjacent on the east, opened in 1990 by the National Graphite Co. of Scranton Pa.; The Calumet Graphite Co. on ranges II and III in rear of Calumet station on the Canadian Pacific railway, worked in 1899 and 1900; and lot 2, range X.

The area was thoroughly examined by Dr.Osann in 1899 and an abstract of his report is as follows:

“The country rock is for the most part crystalline limestone, which is cut by granites and other intrusives. The graphite usually occurs irregularly at, or near, the contact of the limestone with granite or diabase dikes, both rocks being present in the openings, also in irregular vein forms which are massive rather than columnar in character, ranging in thickness form fifteen inches to two feet. These are not solid but apparently sometimes in dike matter.” “Several openings have been made on the property. In the main pit the rocks are limestone with bands of rusty gneiss, which are traversed by a white granite diabase. The graphite occurs principally in two irregular veins, and also in the granite mass, and there is a small vein on the edge of the diabase. The veins are shattered and mixed with the whitish, sometimes reddish granite.”

“This granitic-looking rock has the aspect of a vein in some respect rather than a true dike. It carries several minerals, including scapolite, hornblende, graphite, pyroxene, pyrite, apatite, and others. South of the principal opening, where mining has been carried on, the surface rocks for some distance appear the be all limestone, and in several small prospecting pits, sunk in the rock, a small percentage of disseminated flake graphite was observed.”

Sixty-five tons of this vein graphite in 25 rail cars were mined and sent to the Globe Refining Company of Jersey City, N.J., and yielded thirty-two tons of clean crucible graphite. 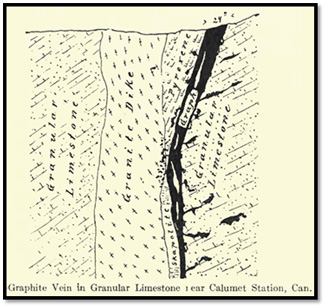 The Morgan Crucible Company of London and also J.H. Gauthier and Company, Jersey City, used some of this graphite in their crucibles and they pronounced it equal to the best from Ceylon (now Sri Lanka).

A number of outcrops, excavations and pits can be noticed, which in varying degree, exhibit the occurrence of graphite, mostly of the disseminated variety in crystalline limestone or in a highly quartzose granite; sometimes pockets of feldspar can be noticed, which contain the graphite in fine scaly particles. (See Right)

This property is very favourably located in the matter of transportation and has other natural advantages; water power can be obtained from Rouge River at a distance of five miles. A mill has been erected on the premises close the adit to the runnel. The main building measures 60x 90 feet. The capacity of the mill is calculated to be about 50 tons of graphitic rock per day. A new departure in this mill will be made by the introduction of pebble tube mills for the cleaning and polishing of the graphite flakes. 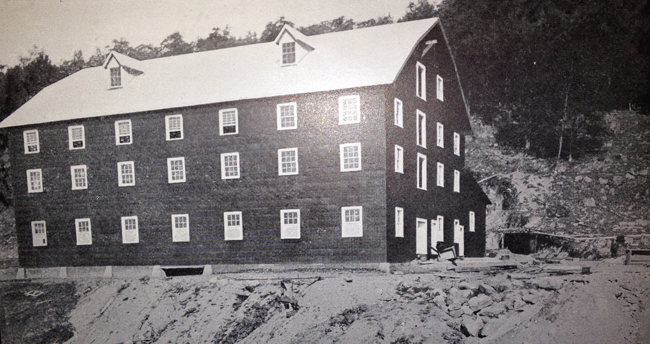